The Significance of Our School Logo (DOJO KAMON) 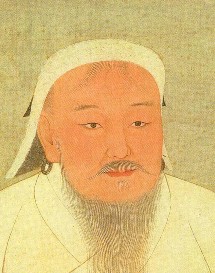 The Denver Museum of Nature and Science recently hosted a remarkable exhibit on Genghis Khan.  It was a powerful exhibit well worth the ticket price.  Certainly, the artifacts themselves were interesting and impressive in and of themselves. However, what I found most fascinating were his political achievements.

Genghis Khan (1162-1227 AD) was the founder of the largest contiguous empire ever known to man.  Spanning a huge proportion of the Asian continent (and including a few failed efforts to invade Japan), what he created was larger than that of the Roman Empire or the British Imperial Empire.  Furthermore, he did this in an amazingly short period of time, just over a century (109 years).  How did just one man’s influence in the 13th century, without any of the technologies that exist today, achieve this massive empire?  He did it not just by brute force, but surprisingly, by having respect for other people’s fundamental beliefs (e.g. religion) and not trying to force people to change those beliefs.

Genghis Khan was brilliant… a vicious murderer, mind you, but still brilliant.  He conquered territory after territory, but did one thing (or perhaps I should say “didn’t” do one thing) that other cultures have insisted upon doing whenever they conquer a land. Genghis Khan was secure enough in his own spiritual beliefs that he didn’t require or attempt to coerce others to believe what he believed.  This quality, I recognize, was the secret of his success.  He didn’t feel the need to change their beliefs.  He allowed these conquered cultures to go on living their lives as they wanted to.  In contrast, the British Empire’s motto was “Make the world Britain” and this is why they incurred so much resistance in their efforts.  The Romans experienced similar troubles.

Aikido can learn a lot from Genghis Khan.  Perhaps if we offer less resistance (Hey, that sounds like Aikido to me!) and allow others to express their interpretation of Aikido as they choose instead of trying to conform everyone to one singular expression, we would finally start to unify this highly-fragmented profession.  It is rather ironic and perhaps sad that the Aikido profession suffers from a lack of what it claims to profess: unity, cooperation, passivity, tolerance, etc.

Past efforts to unify the Aikido community have historically failed, in my opinion, because of an “Everybody must be exactly like me” attitude.  A failure to recognize, respect, and/or appreciate the differences that exist among different Aikido communities prevent us from coming together as a profession.  In my opinion, a “My way is right, your way is wrong” attitude is a surefire way to keep this profession fragmented.  Perhaps if we would begin practicing in our politics what we claim to practice on the mat, then we would be much more likely to achieve O Sensei’s vision of a peaceful, unified world.

Who ever would have guessed that the world of Aikido could learn something so valuable from a violent man who exhibited the very opposite philosophy of what Aikido preaches? I suppose everyone, at times, can be our teacher.