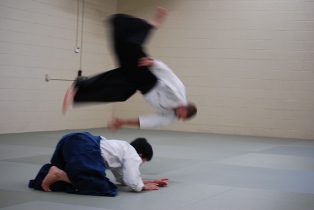 At the very core of everything we do in Aikido, we are focused on being effective at defending ourselves against an aggressor. Although all the other benefits still exist, I do not believe anyone finds themselves in a martial arts dojo without some desire to accomplish that primary goal.
Most of us are in the dojo for a very small time as compared to the rest of our week. In my last article I touched on the topic of ukemi. The idea that we should not dismiss that part of our training is closely related to the desire to maximize our training opportunity during that small window of time. Likewise, we should keep in mind the concept that we are training for the purpose of self defense.
I believe very strongly in this idea and speak of it often when I have the opportunity to teach. I see it time and time again that when a technique fails or doesn’t feel right the nage simply stops and asks uke to attack again. If that is how you train you might as well be doing Tae Bo. I’m not bashing Tae Bo, rather pointing out that you would get the same level of martial arts training with a much better cardio workout. It is my opinion that the martial aspect of any art comes with the intent of the student who studies that art. If you wish to maximize the effectiveness of your Aikido training you must not lose sight of its’ martial nature.
The practical application of this concept is simply to never quit. To look at an extreme example, in a life or death situation there is no time out. In that type of situation it is not over until you or your aggressor is stopped. My hope is that every one of you reading this article would train your Aikido (or any martial art) with that kind of “never say die” attitude. In law enforcement it is common to hear “we always win”.
Police officers have a deeply ingrained sense that no matter what situation they face, they go home at the end of the night. That attitude starts in the training room. If/when the day comes when you face an aggressor with intent to do you or your family harm, the desire to win in that moment won’t be enough. Both you and your attacker have the will to win the battle, the difference will depend on who trained to win.
Take any given technique for example. Sensei has demonstrated the technique and now you are training with your partner. As nage you begin the technique (attempting to emulate what sensei taught), but you accidently move off line in the wrong direction. At that moment the technique you were training is over, but your martial arts training it not over! This is when the real training happens! If you blunder a technique and still maintain a level of awareness that allows you to do nothing else but to break free of your uke then you have accomplished a great deal.
Once you achieve this state of mind you will find other techniques appear before your eyes. When one technique fails you will find 3 more in its place. In my opinion this kind of awareness and ability to flow from one thing to the next (Henka Waza) is far more important that mastery of any one technique. How you train in the dojo is how you will react in a real life encounter. My hope is that everyone would train Aikido sincerely with the intent that someday they may be called upon to use it.
I realize that the subject of this article may be interpreted as being out of line with some of the teachings from the founder of Aikido (Morihei Ueshiba). He taught that true victory was victory over oneself (Masakatsu Agatsu). Many quotes and sayings from the founder imply that in budo (martial way) there is no winning or losing. To defeat someone else at their expense is not winning at all. I believe that Morihei Ueshiba was a very wise and profound man and I acknowledge that I will never even come close to grasping Aikido such as he did. That being said, I have to believe that within his idea of Aikido there was still room for physically stopping an attacker with appropriate force when all other methods have failed. Philosophical debates set aside, Aikido is still a budo.
O’Sensei taught that “budo is love”. Although it is my ultimate goal to understand and embrace that teaching, for now I must follow my heart and train consistent with my current understanding of the art. Just as with anything learned, there is a natural progression. For anyone to believe that they can start their Aikido training with the understanding of O’Sensei is ridiculous. If we study his biography we see that even the founder had a progression and change in philosophy as he grew in his art. In my opinion it is a natural and critical process to begin our budo study with the focus and intent discussed in this article. The ideals and principles taught by the founder serve as a beacon for our ultimate understanding of Aikido shall we be so fortunate to find that path.