“He Say” “She Say” & ‘SHISEI’ Being Centered During Political Turmoil 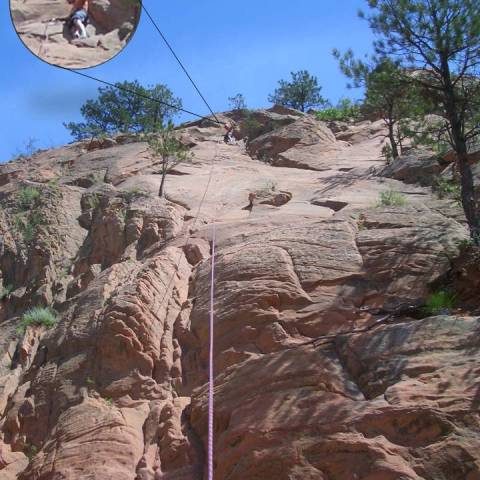 Castle Rock AIKIDO student Tim Keating and I went rock climbing not too long ago down in Colorado Springs.  This was my first experience with rock climbing.  Tim, on the other hand, is an expert, professional mountain climber.  In fact, you can book an exciting domestic or foreign mountaineering trip with Tim through his company, SWS Mountain Guides. (www.swsmtns.com)​

In lead climbing, one person, in this case, Tim, called the leader, will climb up the rock face from the ground up with a rope directly attached to his belt, reach the top or certain height up (depending on the length of the rope) and secure an anchor bolt or reaches an existing anchor in the rock face.  The leader loops the climbing rope through the anchor and then repels himself down to the base.

​The other person, called the belayer, is responsible for the safety of the person climbing.  The belayer remains on the ground controlling the length of the rope for the lead climber. The belayer must constantly pay attention to the position and needs of the climber either taking up slack on the rope or giving additional slack on the rope for the benefit and/or safety of the climber.  If the belayer allows for too much slack in the rope, the climber could be seriously hurt if he were to slip and fall; if the belayer doesn’t provide enough slack the climber might slip and fall when tugged on or snagged by a rope that is too tight.  ​

This safety relationship between the climber and the belayer is not unlike the relationship between NAGE and UKE on the Aikido mat.  In Aikido, the NAGE (pronounced ‘nah’-‘gay’) is the person executing the self-defense technique.  The UKE (pronounced ‘oo’-‘kay’) is the person who mimics an attack and allows the NAGE to practice the technique on them.  If an UKE doesn’t provide enough resistance when practicing a technique, the NAGE is left with a spaghetti-like partner and the technique is unrealistic.  Also, the UKE could be injured by not offering enough resistance as the NAGE uses excessive force to gain control over the UKE.  On the other hand, if the UKE provides too much resistance, it robs the NAGE of the ability to learn and understand the technique properly.

Similarly, offering too much resistance can again lead to injury of the UKE as the NAGE applies additional and unnecessary force to the UKE in order to get the technique to “work.” ​The relationship between climber and belayer, and the relationship between Nage and Uke, is one of constant awareness and give and take.