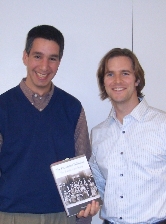 The Principled Politician is the true story of a forgotten Republican Governor of Colorado who took an unpopular stance against ignorance and bigotry toward the treatment of Japanese-Americans after Pearl Harbor.  A stance that would ultimately cost him his career.

Between the years 1942 and 1945, over one-hundred twenty thousand people of Japanese descent from the West Coast of the United States, most of who were American citizens, were rounded up and placed in internment camps.  One such camp was Camp Amache in South East Colorado, near the town of Grenada.  Governor Carr vehemently objected to President Franklin D. Roosevelt’s Executive Order 9066, which required any person of Japanese descent to be relocated to internment camps.  Carr believed that such a directive was unnecessary and violated the Constitutional rights of many American citizens of Japanese descent.

Governor Carr received threats of impeachment, unrelenting criticism in the press, and non-stop phone calls to the Governor’s residence from scared Colorado citizens for his outspoken stance on protecting who The Denver Post even described as the “yellow devils.” Schrager asked, “Who stands up when everyone else sits down?” The answer, in this age of fear not unlike today’s post-9/11 age of fear, is Ralph Carr. “Ralph Carr represented the best of humanity at the worst of times,” Schrager continued.  “He was a man of principle – a man who did the right thing even when it was the unpopular thing.”

The Principled Politician details one man’s crusade to stand up in the face of overwhelming fear, racism, and a lack of leadership.  Carr believed that if the principles of the Constitution are not upheld for everyone one, then they won’t hold up for anyone.  Through his politically incorrect and unpopular position, Carr believed that he was standing up for the rights of every American, not just those of Japanese-Americans.  He was often quoted as saying, “Principles are as true as truth.”  I found many parallels between O’Sensei Ueshiba Morihei and Governor Carr that I think Aikido students would find of interest. Furthermore, many people do not know that O’Sensei had a very small role in Japanese politics himself as he served for a short time as the mayor of a small town in Hokkaido.

Prior to the events on December 7, 1941, Carr was being seriously discussed as a future Republican Presidential candidate, but Carr lost his 1942 reelection campaign in one of the closest gubernatorial races in Colorado history.  He asked, “What are we fighting for abroad, if not for these very ideals at home?” Carr showed Coloradoans a faith that Coloradoans did not reciprocate. Schrager was reminded of the old adage spoken by repeatedly unsuccessful Presidential candidate, Henry Clay, “It is better to be right, than be President,” and he suggested that perhaps we should remember Carr in this context.

I asked, Schrager why this issue was important enough to him to write an entire book on the subject.  He responded with a famous quote from Lester Lave, “People deserve the government they get and get the government they deserve.” He then added, “I would like to see a world where politicians do the right thing instead of the popular thing.  Principled politicians like Governor Carr should be the rule and not the exception.”  A bust of Governor Carr stands in Denver’s Sakura Square, near 19th and Lawrence St. in commemoration of his efforts on behalf of Japanese-Americans.  Part of the inscription reads, “A tribute to his unflinching Americanism.”

How did Carr remain so sold, focused, logical, and rational during a time of great fear?  Why was he one of the only US representatives willing to defend the constitutional rights of Japanese-Americans?  The answers to these questions may perhaps reveal the most admirable qualities of great leaders, like Governor Carr, who frequently go unrecognized and unacknowledged.  Schrager’s book is a long overdue tribute to this man’s character. I highly recommend it’s reading to any Aikido student.

The Principled Politician: The Ralph Carr Story is published by Fulcrum Publishing out of Golden, Colorado.