How to Learn Aikido Faster 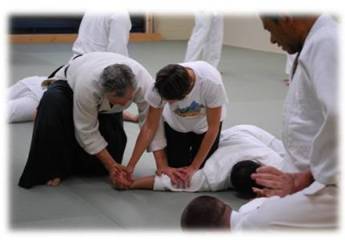 Some years ago, we sub-leased mat space at our Dojo to a Karate group. Over the entrance door of Dojo, we had a large sign that said “AIKIDO”. Some months later, the Karate instructor, without clearing it with us, put his own sign directly below our Aikido sign, that said “Sweat on the mat or bleed in the street”. Needless to say, the combination of the two signs, one below the other, gave the casual observer the wrong impression that the Aikido we taught was a more “hard” form of martial art, and we thought it did not fit the Aikido philosophy as taught by O-Sensei. We had to ask the Karate instructor to remove his sign.

Obviously, Aikido training has something to do with self-defense, as the paired forms we practice on the mat is a form of simulated fights. And we need to acknowledge that many real-life encounters will have violent aspects, including resistance from the attacker, punching, grabbing, kicking and attacks not normally covered in standard Aikido classes. However, O-Sensei insisted many times that the purpose of Aikido was not to defeat the enemy, but to “harmonize all people into one family” and that “Aikido was a manifestation of love”.
Aikido is not a “fighting art” and what is taught in most Aikido Dojos is not “street fighting”. There is no goal of defeating the attacker. While some people train in Aikido to learn to defend themselves, I believe this is not an effective purpose without many years of practice when we have (hopefully) mastered the ability to be firmly grounded in the moment, and are therefore able to move and react spontaneously without having to think about it. Others practice Aikido because they are attracted to its beauty, or its philosophy of non-competition, non-violence and peace. Some want to learn to control themselves. Some train just for the exercise or the fun of it.
Having said all that, good training requires that the Uke deliver the attack with a commitment to reaching the target and with following through with the attack. This does not mean an all-out “full speed” attack (especially with beginning students), as attacks can even be done in slow motion to allow the Nage to figure out their motions, footwork, etc. But this does mean that the Uke must follow through with the attack and not “pull back” or otherwise try to thwart the Nage’s movements. Nage does not attempt to stop the Uke’s attack, but harmoniously accepts the energy of the attack, redirecting it to continue harmlessly, allowing the Nage to achieve control of the Uke.
Aikido is probably the most difficult martial art to master. Its philosophy to love and protect the attacker and to cooperate with rather than compete against your fellow Aikidoists is a rather radical concept unlike other martial arts. It is practically impossible to master Aikido without adhering to and internalizing this philosophy.
Aikido training is an ongoing process, but persistence and dedication is the key. Beginners often find their movements to be miserably spastic and becoming more dyslexic regarding right and left. It takes time and much effort to train the body to relax and not over analyze every movement. It is no easy task to train your body to finding your center and maintaining your balance and harnessing the power of good center and balance in all your movements.
When you observe two experienced Aikidoka practicing, you are struck by how graceful, flowing and effortless their movements are. It almost seems to be a graceful dance. Their circular, flowing movements are the result of mastering the ability to stay relaxed, centered and focused in the now.
With consistent training, this is the goal you aspire to achieve!