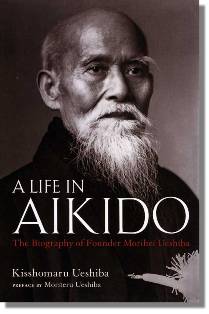 The book was written by O Sensei’s son, Kisshomaru Ueshiba and the new version contains a preface by the grandson of the Founder and current “Doshu” or leader of the Aikido world, Moriteru Ueshiba.

The 300 page hardcover is filled with dozens of high quality and rare pictures of Osensei. As would be expected, the book greatly details the life of Morihei Ueshiba and the development of the art of Aikido.  However, the book is also filled with thought-provoking philosophy and introspection as perceived and interpreted by the founder’s son.

A must read for any and every Aikido student.  This book is an essential for anyone’s biography or Aikido book collection and it is available at Amazon.com.